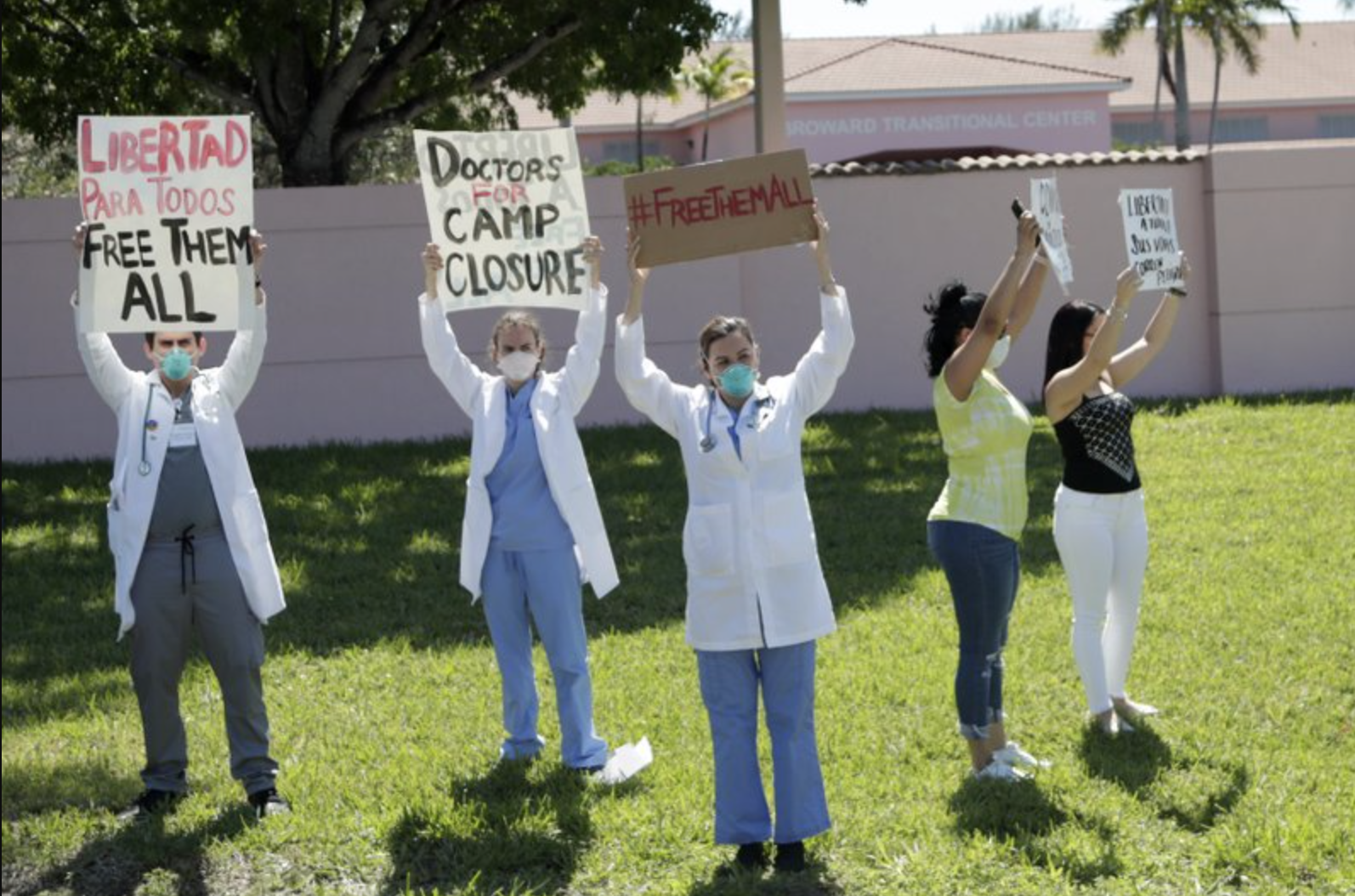 Dear Members of the Florida Delegation to the 116th United States Congress,

Dear Members of the Florida Delegation to the 116th United States Congress,

We are writing to request that you publicly demand the immediate release of detained immigrants under ICE custody in light of the growing public health crisis caused by the COVID-19 outbreak. Conditions in Florida’s immigration detention centers make the threat of a COVID-19 outbreak imminent at Krome Service Processing Center (Krome) in Miami, Florida, Broward Transitional Center (BTC) in Pompano Beach, Florida, and Glades County Jail (Glades) in Moore Haven, Florida. People will die as a result. Those locked up in detention are already extremely vulnerable to the spread of infectious disease due to their deprivation of liberty, physical proximity to others, and ICE’s horrendous track record of inadequate medical care in custody. Ten people have died in ICE custody this fiscal year, even before the coronavirus outbreak. Every day that immigrants remain detained poses a serious threat to their safety.

ICE holds total discretion about who may be released and when. It is completely within their power to release all immigrants in their custody, beginning with those who are most vulnerable to COVID-19. We ask that you demand they do so immediately, before detention camps become death camps.

While lawyers report a real struggle getting actual information from the facilities, especially since visitors are now banned and phone calls are restricted, we can attest that conditions are worsening:

● People detained at all three detention centers report that there are positive cases of COVID-19. The symptoms they are witnessing are consistent with COVID-19-coughs, chills, fevers, and other symptoms–even though ICE continues to deny that there are positive cases of COVID-19 in these facilities. Detained individuals say those who are sick have received minimal to no medical treatment. We have heard reports of people being taken into quarantine at all three detention centers. On March 30, for instance, we heard that a man was taken to medical and staff came into the dorm to pack up his belongings wearing gloves and masks. That same day, court was shut down at Krome “for deep sanitation,” and detained individuals say that it was because three people tested positive for the virus. All of this is inconsistent with ICE’s official statements that there are no cases of COVID-19.

● Balking public health recommendations for social isolation to prevent the spread of COVID-19, ICE indiscriminately transfers people from Krome to other detention centers during this pandemic. On March 26, people detained at BTC wrote a letter with 11 pages of signatures, detailing the conditions and noting that “ICE still brings new detainees to this facility on a daily basis without administering proper tests or checks but simply a temperature check, knowing full well that not every individual will display the common symptoms.” On April 1, FOMDD received reports of 20 new individuals being brought to Glades. Transferred individuals are not being properly screened upon arrival (they merely have their temperature checked, despite the likelihood of COVID-19 carriers being asymptomatic). Guards appear concerned as well: FOMDD has heard that they are reluctant to report to work for fear they will not be allowed to leave and for their own well-being and safety.

● BTC was without water for five hours on March 17, and Glades has run out of basic toiletries, hygiene products, and medicine. A man detained at Glades reported on April 2 that the facility has run out of all antibiotics and all medicine for colds, pain, and diabetes and will not receive a new supply for at least seven days. On March 29, a man detained at Glades reported that the facility was out of toothpaste. On March 30, a man from Glades reported that requests for hand sanitizer were repeatedly denied.

● Detained immigrants have also reported concerns that Glades is running out of food. They are concerned because during this public health crisis they have no access to nutritious food like fruit. In late March, the facility was serving liquid meals such as watered-down vegetable purees. Those detained at Glades report that it does not even look like food and that “pets eat better than we do.”

● Feeling like they are “sitting ducks” awaiting a public health catastrophe, people have gone on hunger strikes at Glades, Krome, and BTC.

● Strategies for mitigating the spread of the virus have been inadequate and misinformed to the point of verging on bizarre. For instance, at Krome, all those at high risk of COVID-19– over 70 detainees who are elderly or have chronic medical issues–are being housed together in Pod 1, sleeping on cots and even on the floor. The only screening they receive is to have their temperatures taken once per day. Precautions have not otherwise been heightened as there is no increased access to hygiene products.

● No detained individuals at any of the three facilities have been provided extra soap, extra cleaning supplies, or hand sanitizer, let alone masks, despite confirmed positive cases inside the facilities.

● There is no such thing as social distancing in immigration detention. People at Glades County Jail are housed with 96 people per pod, sleeping in bunks and spending

most of the day in a single common area. At Krome, over 65 people share a single pod. At BTC, a former hotel, six people share one cell. At Krome and Glades, dozens of people share toilets and showers. This is an ideal breeding ground for an infectious disease such as COVID-19.

● The quarantines in place result in a large number of individuals being placed together in a crowded and cramped area without space necessary for social distancing. This is a dangerous situation, which not only puts these detained persons at risk, but by exacerbating the spread of the virus, creates a dire public safety issue for everyone.

● People in all three detention centers are scared for their lives. They know how slowly staff respond to their medical complaints on a typical day–without the threat of coronavirus–and how ineffective the medical treatments are even when they are provided. This has also been documented by sources such as the Southern Poverty Law Center, which notes that at Glades “there is only one doctor at the facility and that doctor is only available four days a week.” Even on a typical day, ICE detention facilities nationwide are ridden with substandard medical care and sanitary conditions. South Florida detention facilities frequently conduct inadequate health screenings, rely on untrained medical care providers and provide insufficient staffing, and delay and deny care and medication.

Those detained at BTC, Krome, and Glades are asking to be released for their own safety. There is no possible way for any of these facilities to safely house this number of people during a health pandemic such as this. ICE must act now or be faced with a wave of illness and death in their custody. We ask that you take a public stand in demanding that they do so immediately.